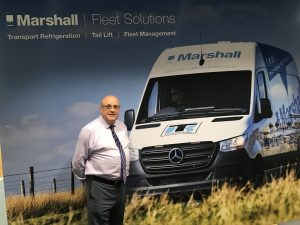 As part of its planned sales expansion programme, leading commercial vehicle company Marshall Fleet Solutions has announced the arrival of temperature-controlled industry specialist Steve Strong in the position of Parts Sales Manager at the Cambridge based company.

In his new role at MFS, Steve is now responsible for the ‘over-the-counter’ sales of spare parts and accessories, reporting directly to MFS Sales Director, Michael Kane.

Steve Strong is the latest in a series of additional appointments within the new look sales team at MFS, and joins the company from manufacturer Connexas Group, formerly Seven Telematics, and prior to Connexas he spent many years in a senior sales role at Carrier Transicold.