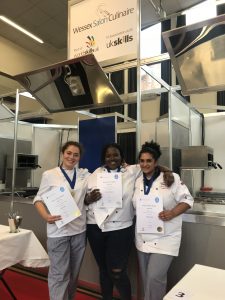 Approximately 300 culinary students from across the country descended upon Brockenhurst College to take part in the two-day competition extravaganza. The event is one of the biggest and most exciting competitions in the UK. Divided into five different categories: live hot, live cold, restaurant, display and the Wessex bake-off, it is open to student chefs, front of house staff and patissiers.

Now in its fifth year, the competition is designed to provide young competitors with their first taste of professional competition experience and showcase the emerging talent of the hospitality industry.

Chairman of the Craft Guild of Chefs, Andrew Bennett was there to support the event. He comments; “As an organisation we are always looking for ways to encourage the younger generation to compete in events like this. It’s an excellent opportunity for growth, experience and a way to promote themselves to the industry. The standard and effort from all competitors this year has been exceptional.”

“What we do as a college is support it. It’s a massive team effort. We do it for the students. It is about giving them that platform to take them on that little bit higher. The competition this year has been great. It has been fantastic! It’s been great every year, I love it!”

In a race against each other and the clock, competitors demonstrated a wide range of culinary skills including baking, gourmet, marzipan modelling, fish filleting, cocktails, coffee, napkin folding and table lay-up.

“I’m really happy. It means a lot because I’m trying to build a name for myself, so I want to do as many competitions as I can. I had faith in my dish. I’ve been practising it many times and had chefs at work taste it over and over. The aim is to be a famous chef one day. I started late so I truly believe, never give up on your dream. Keep pushing!”

The judges were led by chairman Steve Scuffell. His team included amongst others, experienced chefs Dawn Pennington of Penningtons School of Cake Artistry in Bournemouth; Luke Matthews executive head chef from Chewton Glen Hotel in Hampshire and Alun Davies, RAF flight sergeant based at Worthy Down- food services wing. Each competition had its own judging criteria and marked independently on merit.

“The idea is to encourage the young chefs in the industry to compete and share their craft skills. It gives them excitement and a bit of a buzz to compete to try and win something. My advice to younger chefs is to learn the most basic skills. That’s most important. Once you have the basic skills, you can just build on those.

“It’s nice to see the live events because anything could happen and that’s nice. It gives the students a bit of pressure to work under. That’s what the industry is about.”

Judge Luke Matthews, said, “I think first and foremost it is to encourage youngsters to take part. The competition this year is at a very good standard. Every year the standard does improve. With not that much experience at a young age what they’re producing is incredible,” and judge Alun Davies said, “It’s good because it’s mainly aimed at college level juniors which is fantastic because it’s given them a bit of enthusiasm.”

Davies continued by sharing what he would look for when he is judging. “You start off with the visual, how does it look? Is it appealing? What skills have they used? How they’ve decorated it. A lot of it’s down to attention to details as well. Flair, well-seasoned and that the flavours work well together.”

For the full list of award winners, please visit