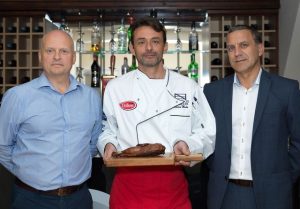 In Suffolk, UK, a new dish created by development chef AT NORTHGATE FOODS – Kristian Wade – in collaboration with a new international food partnership, is poised to make a significant difference to Indian food menus globally.

The Spice Trade – created with the formation of the historic Spice Road which early traders formed to connect Asia with Europe – became a truly global activity in the 15th Century.  Since then, chefs have continued to mix up herb and spice offerings to energise menus worldwide.

The new, exquisite and transformational dish is a Southern Asia-Inspired Indian Aromatic Duck Cha-pancake (Chapati-Pancake).  A Pekin duck dish, the concept is a development of the duck offering, originated in Indian cooking, that followed the family tradition of keeping Runner ducks for egg production. 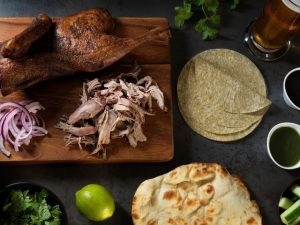 The slow-cooked, crispy DALEE duck meat is coated in a blend of delicate Indian spices and served with red onion, chopped herbs, a chapati style pancake and a mild-Tamarind (made from the seed pod of the legume from tropical regions of Africa including the Sudan) or a spicy sauce alternative topped off with zesty lime juice.  Now rolling out to Indian restaurants throughout the UK, the global partnership behind the idea includes Northgate Foods, THE BR Group (supplying ducks from The Netherlands), East End Foods producing the sauce accompaniment  and Ming Foods creators of the brand-new Chapati Pancake.

Commenting on the development of the new concept, Kristian Wade, AT Northgate Foods said: ‘The blend of herbs and spices used in this dish mixes up cooking themes from across all 28 regions of India.’

‘It is a melting-pot of ideas and a combination of infusions to satisfy the six different tastes that make up our palette.  Put simply, it is one dish that will engage all the senses.’

‘And we are massively proud to say, that like the UK’s most popular Indian dish,  Chicken Tikka Masala, it has been originated in the UK.’

‘We hope it will fit comfortably alongside the rich and complex flavours and fragrances of traditional Indian cuisine, and make its way across Europe and the rest of the world.  We think it deserves a place in global food history .’

‘Is the Europe market ready to try this new Indian spice journey?

Adds Jan ijzerman, of BR Group in Holland: ‘We have specialised in producing quality duck products for over 50 years and we are beyond excited by the potential of this new food concept developed with our partners in the UK.  As word is already spreading fast among the restaurant sector, we expect this could be the next big Southern Asian food phenomenon.’

SAM DUONG OF MING FOODS, DESCRIBING THE special ‘CHAPANCAKE’ DEVISED FOR THE DISH, SAYS: ‘WE HAVE BEEN ON A CULUTRAL JOURNEY TO  CREATE THE UNIQUE INFUSTION OF INDIAN SPICES THAT MAKE UP THE Indian-inspired CHAPANCAKE.  IT HAS A FLAVOUR MIX AND PROFILE ALL OF ITS OWN THAT MAKES THE DISH full of FRAGRANCE AND FLAVOUR.’

‘WE HAVE BROUGHT TOGETHER A DIVERSE RANGE OF CULINARY EXPERTS TO BRING THIS POWERFUL AND INSPIRED DISH TO THE TABLE.’

Adds Raj Kapoor of East End Foods.  ‘We import whole spices from 80 countries around the world. Our UK further processing spice milling operation in West Bromwich, where we re-clean, grind, blend,  and freshly pack our spices, is state of the art.’

‘East End source from key regions whole spices, with a sustainable supply chain in place from farm to fork. The aromatic duck blend is pure, freshly ground spices, delivers critical to quality attributes of aroma, flavour, texture, and a truly authentic taste of the East.’

The Indian food of today can be tracked back to the days of the Harappan civilization which was over 5,000 years ago.  India produces a bigger variety of spices today than any other country in the world.

The health benefits of Indian foods are now well accepted around the world.  Indian spices are rich in minerals and dietary polyphenols and flavonoids, compounds with strong antioxidant and anti-inflammatory benefits that help protect against disease, aid digestion and boost immune function.

NORTHGATE FOODS IS A SPECIALIST DISTRIBUTION COMPANY, BASED IN SUFFOLK, WHICH SUPPLIES ALL FORMS OF MEAT AND SEAFOOD PRODUCTS TO THE FOOD SECTOR.  ALL THE COMPANY’S PRODUCTS ARE FULLY ACCREDITED AND TRACABLE – AND MANY ARE SOURCED FROM THE UK.