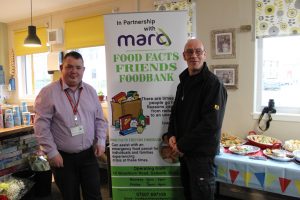 JB Foods, a member of the Caterforce foodservice buying group, has been a supporter of Food, Facts & Friends since September 2018, supplying short dated stock to the charity and its first foodbank in Penicuik.

The organisation has now expanded its work in Midlothian, opening a second site in Dalkeith, which the wholesaler will also help to support through its partnership with the foodbank.

The day was attended by the Lord Provost of Midlothian and television star, Sister Rita, who was the star of a BBC series following families living on the breadline in North Manchester.

Food Facts & Friends endeavours to distribute as much fresh produce as possible, instead of just cans, and to do so relies heavily on the support of local supermarkets, stores and wholesalers.

Charlotte Thompson of JB Foods said: “We’ve been an active supporter and supplier to Food Facts & Friends for almost a year now, so it’s great to see the organisation growing in the region as the work it does is vital. The second foodbank will allow the charity to help even more people and families that are in need. We will continue to support Food, Facts & Friends as part of charitable endeavours across Scotland.”