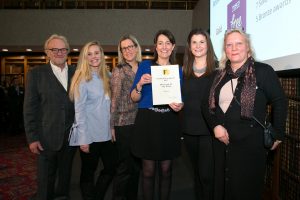 With over 30 winners presented with certificates by Antony Worrall Thompson in a packed room of 350 guests at the Royal College of Physicians, the FreeFrom Food Oscar for 2017 was awarded to BFree for their Sweet Potato Wrap, with judges praising it for being free of all 14 major allergens.

Retailer of the Year winner for a third year in a row was Tesco, were presented with their certificate by award sponsor multi temperature supply chain specialist Oakland International.

Oakland International Co-Founder, Sallie Attwell, commented: “Congratulations to Tesco on winning their third Retailer of the Year award, and our congratulations to Irish bakers, BFree the night’s overall winner of the ‘Marble Mo’ award.

“It was a wonderful evening filled with celebration and success and for our third year once again delighted to sponsor this category.”

In celebration of the Awards 10th Anniversary Clare Marriage of Doves Farm Foods was crowned as the Awards’ Freefrom Superhero for the massive contribution that the Doves Farm flours and foods have made to the freefrom industry over the last ten years.

“It is hard to believe how far freefrom has come in the last ten years”, said Michelle Berriedale-Johnson, director of the awards. “No matter where you look in the food world there are now excellent freefrom equivalents to standard offerings, many of them as good, or better – and often healthier – than the originals.”

Said Antony Worrall Thompson, long term patron of the awards commented: “It is amazing how much has changed in just ten years. All credit to the pioneering small producers who have followed their dreams to create wonderful freefrom foods – to the supermarkets who have backed them – and to the FreeFrom Food Awards who have encouraged and celebrated them!”