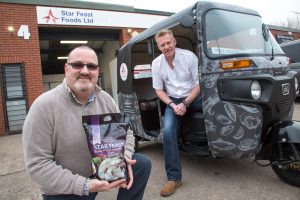 One of the UK’s leading seafood suppliers has launched a new business to target restaurants and the general public.

Star Agro Marine Food, which provides more than £9m of sustainable shrimp and related products to supermarkets across the country, has invested over £250,000 into rolling-out Star Feast Foods in the Midlands.

The new company will immediately create five jobs and will be responsible for the wholesale, restaurant, trade counter and home delivery aspect of the original business, with bosses predicting first year sales could top £3m.

A new Tuk Tuk – sourced all the way from Pune in India – has arrived in the Black Country and will be used to market the new offer, which will include a large range of seafood, poultry and dried goods.

“We have had a fantastic year with the major retailers, with more than £5m of new orders secured over the last twelve months,” explained Steve Money, Managing Director.

“However, we don’t like to stand still and there’s only so much Star Agro shrimp we can supply. We need an alternative approach on the wholesale and home delivery front, which is why we’ve branched out with the launch of Star Feast.”

He continued: “This will focus on growing the trade counter, supplying into more restaurants and marketing our home delivery to the general public. The latter means people can have fresh seafood and poultry products direct to their door, simply by picking up the phone or placing the order via social media.

“Better still, on certain occasions your delivery will be completed using our authentic Tuk Tuk, which is causing a major stir among fellow motorists in the Black Country.”

Wolverhampton-based Star Feast will originally focus on the West Midlands and in developing its full range of products ahead of exhibiting at a number of trade shows later this year.

It is also exploring opportunities to broaden its reach in the South West and London, with plans in place to create a network of supply bases over the coming months. If these deals are completed, more than 8 people will be employed and the range could be as diverse as 75 different products.

Steve concluded: “The new business is all about understanding what our different customer bases want and a dedicated wholesale offer – with more choice – was at the top of their list.

“We’ve got lots of exciting plans to secure market share, including the Tuk Tuk marketing campaign and the future launch of a mobile app that will make ordering extremely easy. Minimum orders are just 1kg so it’s a great way to have fresh seafood delivered right to your door.”