Yearsley Group took on an extreme test of physical endurance, Tough Mudder, to help raise £60,000 to celebrate their 60 years in business 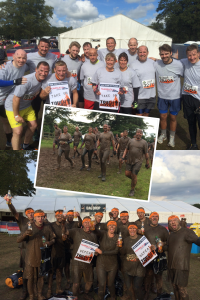 13 members of staff from Yearsley Group swapped the cold store for a muddy field to take on the 12 mile Tough Mudder challenge in Cheshire.

Team Yearsley, led by directors Harry Yearsley, Jonathan Baker & Tim Moran, took on the infamous cry baby, artic enema and electroshock along with 23 others obstacles, to complete the course in less than five hours. Harry Yearsley commented, ‘Tough Mudder certainly lived up to its reputation of being one of the toughest fitness events on the planet, but with amazing team work, camaraderie and knowing it was for a great cause, we all helped each other and eventually crossed the line together.’

The team embarked on the challenge to support Yearsley Groups’ aim to raise £60,000 to celebrate its 60 years in business. The money will be split between four national charities, Parkinson’s UK, British Heart Foundation, Cancer Research and Help for Heroes and twelve local charities chosen by each of the depots throughout the UK.

To support the team go to http://bit.ly/1KturFs