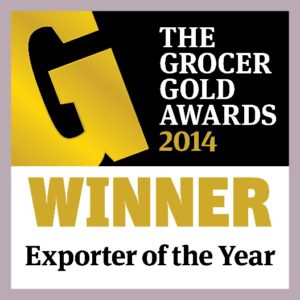 The Ice Company, the UK’s largest ice manufacturer, has achieved recognition for extending their business in Europe by winning “Exporter of the Year” at the annual Grocer Gold Awards! The Grocer is the UK’s leading FMCG magazine and the Gold Awards are the industry’s “Oscars”. The award was presented by the Secretary of State for the Department of the Environment, Food and Rural Affairs, the Rt Hon Owen Paterson MP.
The Ice Co forms part the family-owned J Marr Group, a company with its’ roots firmly established in Yorkshire. Joseph Marr started it all in 1860 when he purchased his first fishing vessel, and to ensure the freshness of the fish, huge volumes of ice were required. At the time the ice was imported from the glaciers of Norway! These days, huge production vessels across four manufacturing sites produce Ice which is now less about keeping fish fresh, and more about keeping your drinks cool through the heat of summer, and beyond! Joseph Marr may no longer recognize much of his early work, since the last of the original fishing business was sold off 10 years ago, but he might recognize the entrepreneurial skills and ingenuity which were integral to his business all those years ago.
So why might the Ice Company have won such a prestigious award? Here’s the thoughts of the MD of Iceco Europe, Paul Doughty:
“You may recall the heat wave of last summer, which placed huge demand on the Iceco from UK customers alone. Not only did we supply the major retailers here (which led to the Tesco Frozen team presenting us with the ‘Impulse Supplier of the Year’ award), but we were also able to extend our sales into a number of European markets.”
What is the appeal to European customers of the Iceco’s products?
“We offer a range of products to give consumers a choice of ice, just as you might find in other food categories. So, apart from standard packs of ice cubes, the company also provides Premium Ice Cubes, Spring Water Ice Cubes, Crushed Ice, Ice Blocks, Dry Ice, Ice Sculptures, Flake Ice.. and the list goes on.”
A recent innovation from the Iceco, ‘Ice & Slice’, offers consumers the chance to enjoy the bar experience at home in a conveniently packaged format. Doughty explains “we pack Premium ice cubes with frozen limes, meaning you simply pour your drink and add the ice and lime slice – no fuss, no mess, no waste.” The company were rewarded in March of this year when the product won the ‘Special Award for Innovation’ at the WABEL awards in Paris.
This Autumn also sees the launch of the new Super Cube, and Doughty goes on to explain how it was developed “we were taken by the seeming ‘explosion’ of Gin & Tonic found in the bars of Spain, wherein the drink simply requires one Giant, Slow-Melting Ice Cube to give a taste sensation and aesthetic appeal that you don’t find with traditional ice cubes. And so we created the Super Cube, our latest product which is finding great success both in the UK and abroad.”
3 years ago exports made up just 7% of the Iceco’s business, but this year the run rate has increased to 25%, an amazing growth in such a short time. The Ice Co was honoured to have been awarded such a prestigious award at a ceremony attended by so many major brands and retailers and to be on a podium of winners including Coca Cola, Muller and Heineken. As the Secretary of State pointed out to the Iceco, “It’s fantastic to hear about your achievements on the International stage and I hope this provides inspiration to other food and drink businesses wanting to expand. Helping the industry to grow, especially through exports, is one of my top priorities.”
For more information contact Ginny Durdy or Paul Doughty at the Iceco on 01977 655800